Use the form above to find your loved one. You can search using the name of your loved one, or any family name for current or past services entrusted to our firm.

Click here to view all obituaries
Search Obituaries
Immediate Need
We are here to help you. If you have need of our services, please call us, day or night, at:
718-331-8000
To better prepare yourself, we have provided you with some helpful information regarding the immediate need process.
Contact Us / Location

Ordering flowers from our site ensures that your order will reach us or the family in a timely manner, and your gesture of support will remain acknowledged in the Book of Memories for future generations. We only work with local florists so we can maintain the sense of urgency and quality of your selections. We thank you for helping to support the family during their time of need, and will fondly remember your kind gesture.

In Memory of
Gustave
Romano
2022
Click above to light a memorial candle.
Memorial Candle Tribute From
Scarpaci Funeral Home Inc.
"We are honored to provide this Book of Memories to the family."
View full message >>>
Send Flowers
Menu

In the event that there is an error
in the information presented,
please contact the funeral
home by clicking here. 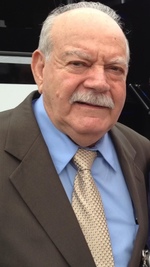 Gustave "Gus" Romano, 85 of Brooklyn, NY was called home on Friday, November 11, 2022
surrounded by his loving family. He is reunited with his loving wife Eileen, his daughter Mary,
his parents Lucy and Anthony, his siblings Nicholas, Florence, Franceso, Joseph, Mildred and
Dolly and his companion of 9 years, Eileen Hoynes. He is survived by his brother Anthony and
his wife Sheila along with his sister in law, Mary Jane O'Leary.
Gus was a loving and devoted father and father-in-law to Denise, Gus and his wife Vanessa, John
and his wife Debra. He was the cherished Poppy to John Anthony, Connor, Alexa, Nikolas, Gus
Michael, Olivia, Brielle and Kiera. He was loved by many nieces, nephews, great nieces,
nephews, cousins and friends.
Gus, who was called Sonny by his siblings, was born and raised in Brooklyn, New York and was
the youngest of 8 children. He attended Grady Technical High School and then served as a
United States Reservist in the National Guard where he displayed a great love for his country. He
was a butcher by trade and worked in the family butcher shop as well as Krasney Supermarket
and Al & Tony's Meat Market. He was called to the NYC Department of Sanitation in 1969 and
retired in 1994. In his 25 year career he made life-long friendships that he cherished until his
passing.
In 1960 Gus met his wife, Eileen and they married on October 13th

,1962. They remained together
for 47 years until her death on December 12, 2009. They settled in Sunset Park, Brooklyn where
they raised 3 children.
Gus volunteered his time at Our Lady of Perpetual Help Parish where he was involved in many
church activities. He was also very active at the Knights of Columbus Sheridan Council where he
managed the catering events with joy and enthusiasm.
In 2012 Gus moved to Cairo, NY to live with his companion, Eileen Hoynes and was embraced
with love by the community and formed many great friendships while he volunteered his time at
Our Lady of Knox Shrine and served at the Knights of Columbus East-Durham council where he
earned The Fourth Degree.
In 2021 Gus became ill and moved to Old Bridge New Jersey where he lived with his son John
and daughter-in-law Debra. Debra took loving care of Gus looking after him while he received
treatment at Memorial Sloan Kettering.

Gus was a man of strong faith and character, always willing and eager to help anyone in need or
offer guidance and support. He enjoyed the simple things in life; faith, family, friends and good
food. His greatest joy was spending time with his family and friends and was able to do so
during his last few years at his home on Long Beach Island, NJ where many special memories
were made.
His family thanks God to have had such a wonderful patriarch for so many years. Their love and
devotion for him will never fade and they will carry him in their hearts for the rest of their lives.
In lieu of flowers, the family invites you to make a donation to one of Gus's two favorite
charities, the St Jude Children’s Hospital or the Tunnel to Towers Foundation in Gus’s honor.