Use the form above to find your loved one. You can search using the name of your loved one, or any family name for current or past services entrusted to our firm.

Click here to view all obituaries
Search Obituaries
Immediate Need
We are here to help you. If you have need of our services, please call us, day or night, at:
718-331-8000
To better prepare yourself, we have provided you with some helpful information regarding the immediate need process.
Contact Us / Location

Ordering flowers from our site ensures that your order will reach us or the family in a timely manner, and your gesture of support will remain acknowledged in the Book of Memories for future generations. We only work with local florists so we can maintain the sense of urgency and quality of your selections. We thank you for helping to support the family during their time of need, and will fondly remember your kind gesture.

In Memory of
Fr. Michael G.
Cedro
2020
Click above to light a memorial candle.
Memorial Candle Tribute From
Scarpaci Funeral Home Inc.
"We are honored to provide this Book of Memories to the family."
View full message >>>
Send Flowers
Menu

In the event that there is an error
in the information presented,
please contact the funeral
home by clicking here. 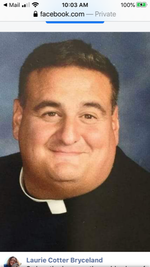 Father Michael G. Cedro, 48 Roman Catholic Priest with the Archdiocese of New York passed away suddenly on August 16, 2020. He was the pastor of Holy Cross Church in South Centerville, New York.

He was born on June 2, 1972 in Brooklyn, NY. He went to St. Peter’s Boys High School in Staten Island. He was on the National Honor Society and lettered in tennis. He went onto Wagner College and later St. John’s University. In 1998 he attended St. John Neuman in Riverdale, NY. He then went onto St. Joseph’s Seminary in Yonkers. He was ordained to a deacon in 2003. On May 15, 2004 Michael was ordained to the priesthood. His first assignment as a priest was at St. Columba in Hopewell Junction, NY. He was assigned to St. Augustine and then St. Joseph’s. In 2012 he became the pastor of Holy Cross Church in South Centerville, NY.

He was adored by his parishioners. He was an avid Mets fan and loved to watch The Big Bang Theory. His highlights were his trips to Disney and cruising with his parents. He was cherished by his family especially his two nephews who were everything to him. His mother says, “He was the light of her life and he was loved so much by his family.” His father went to say, “When things looked bleak, he always had a way to shine light on things.”
Michael is survived by his parents Michael and Carolyn Cedro. His sister Jennifer and husband Sal, and his two adoring nephews Nicholas and Salvatore. He is loved by many aunts, uncles, cousins, and friends.
He is now in his new home in Heaven with his four grandparents and the Lord